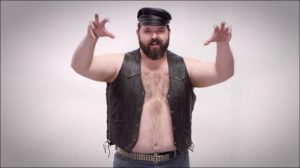 It seems like the “dude” side of gay culture always gets the most attention; women are excluded from all the fun. On the male side of the gay community, various physical types are categorized, each with its own distinct name. A twink, for example, is a younger guy with boyish good looks. One step below a bear is an otter. These are slightly hairy guys who might not be quite as big as their counterparts. What exactly is a “bear” in gay culture?

Bears are usually on the bigger side. They aren’t necessarily obese or overweight, but they bring some bulk to the table. They might not be muscular, but when you imagine a bear you imagine the picture of masculinity. They might not portray the same rugged disposition in person as they do when in a picture frame, and so a photograph of a bear might not do them justice. Before the term was popularized, it was used for any hairy gay man. The term has continued to evolve.

Bear Magazine brought the term into the mainstream, and gay culture has used it ever since. Even today, however, there is a lot of debate surrounding exactly what a bear is. The fact that so many other names (twink and otter included) have developed over the decades has led to confusion even within the gay community, as not everyone knows them all.

Within gay culture, there is a much more elaborate bear community. Because there are now so many different types of bears, some feel discriminated against. During some events, chubbier guys are excluded so that more muscular bears may participate. This causes a lot of criticism from both inside and outside of the gay community, as discrimination of those who don’t fit one person’s standards has become a lot more pervasive. Considering the common struggles of the gay community as a whole, it doesn’t seem to make sense that there is so much in-fighting and rampant discrimination within the community itself.

More controversy has developed because of the focus on physical features, but that same criticism surrounds the entire gay community and its subdivisions, as most all of them focus on the same type of similarities or differences.

Other subdivisions of the bear in gay culture include the cub, or a younger bear. The chub is more likely to be overweight or obese. A panda is an Asian bear. A polar bear is an older man who has experienced hair color loss. An ursula refers to a female bear. Although criticism of these divisions is common, popular culture continues to take note of this tiny detail of gay culture.