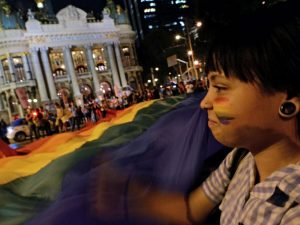 Everything we know about the mind and body confirms one simple fact: falling in love with the same sex does not constitute an illness or disease. Yet there are many cultures around the world that still choose to define it as such, in spite of everything the greatest minds have already proven to be true. One judge in Brazil has taken a step into very extreme and very dangerous territory, approving “conversion therapy” after ruling that homosexuality is a disease. How this is still up to a judicial branch and not medical practitioners is beyond reason, but there it is.

Federal Brazilian Judge Waldemar de Carvalho made the decision, and there was a near-immediate uproar by gay rights activists worldwide. Carvalho chose to listen to an evangelical psychologist–Rozangela Justino–who believes conversion therapy is a tried and true way to get rid of the gay.

What is conversion therapy, exactly?

Well it’s sort of a catch-all phrase for government-backed bullying, if nothing else. The therapy ranges from lobotomizing the “patient” with an ice pick to chemical castration to electrically shocking the genitals. Others prefer a more crude means of treatment, as sometimes simple beatings will suffice. Many times conversion therapy results in permanent physical damage or death, and of course the psychological damage can be just as bad.

Then again, that seems to be the point. Those who believe the therapy works know that it’s possible to condition an animal (humans included) to enact a certain behavior through means of psychological reinforcement. If you want to condition a dog not to defecate indoors, for example, then you might raise your voice when catching it in the act, and then lead it outdoors to finish its business there. You might reward proper behavior with a treat. Do this enough times, and sooner or later the behavior you want to reinforce will be a matter of habit.

The problem is, being gay isn’t a behavior. Who you fall in love with may govern certain other behaviors that generally play out behind closed doors, but feelings are just that–feelings. They aren’t behaviors, and so they can’t be conditioned into whatever you want them to be through brutality or any other kind of barbaric psychological reinforcement. Conversion therapy does not work, and we already know that. You might push someone into a couple years of pretending (or suicide), but that’s it.

Why do people still advocate for the administration of this therapy in government and certain social circles? That’s a lot more simple: because conservative members of some religions believe that homosexuality is a sin. Openly gay members of government, real psychologists (not the ones who dabble in pseudoscience), actors and pop stars have all banded together to say that this advocation of conversion therapy is a major blow to equal rights, and without a doubt a step backwards.

You can’t “cure” homosexuality, no matter how much you might hate it. It’s time for our societies to grow up a little and stop squandering precious resources on the things that matter the least.