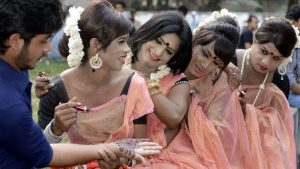 In a time when the social norms of gender identity and sexual orientation is being challenged at the highest levels of government and religion, regions in South Asia have already accommodated those whose gender identity might be considered a little more obscure by the Western world.

There exists in parts of South Asia, particularly in Nepal, Pakistan, India, and Bangladesh, people known as hijra. In the parts of society that accept and acknowledge them, this generally refers to a person – typically a man – who becomes transgendered later in life. They tend to renounce sexuality altogether, bearing both masculine and feminine qualities upon themselves. People of this “third gender” (which is now legally recognized in parts of the world listed above) are generally segregated from common society, whether by a will of their own or by being cut out forcefully. The term “hijra” itself is normally derogatory, particularly in the Urdu dialect of India, as it literally means “leaving one’s tribe.” Many hijra reside in all-hijra villages overseen by a guru, with several young males undergoing rites of initiation that include removal of the testicles, scrotum and even the penis itself.

Those that manage a life within general society tend to do so at the outermost margins and are normally regarded as one of the lowest castes. While it has been mentioned that many hijra renounce sexuality in total, it is interesting to note that many hijra usually eke out a living as sex workers and prostitutes, though others “earn” their keep through means of extortion, begging and performing at various ceremonies.

Only up until recently, hijra faced extreme discrimination from the rest of society with disproportionate health care, education and job and housing opportunities. They were known to suffer brutal, physical violence from crowds of people, and violence set upon them was rarely ever investigated by police due primarily to apathy. When India re-criminalized homosexual relations in 2013, attacks of physical, psychological and even sexual natures became more prevalent. Hijra and kothi, an entity separate from hijra who generally take a more receptive role in sexual relations (often, if not entirely, with heterosexual men) were particularly susceptible to attacks of this kind.

In early to mid-2014, legislation was finally passed in India that legally recognized hijra as a “third gender,” and thus awarded them proportionate opportunity for jobs and education, although they are also legally recognized as a “socially and economically backward” class who still linger on the fringes of society.

Although the progress is slow-going, recognition of basic human rights in the communities where hijra are most prominent is moving forward. India and Pakistan, in particular, have recognized hijra as a legal “third gender” and extended opportunities for growth through jobs and education, though there is still struggle for hijra to become more highly involved in government. While Pakistan first allowed a hijra to stand for election in 2013, other communities find it difficult to participate fully in the democratic processes of their regions. In order to vote in India, one must identify as either male or female – a task impossible to carry out for a hijra who identifies as neither in regard either to gender identity or sexual orientation. In this way, hijra still struggle to attain equal recognition as males or females in society, though it is difficult to argue against the progress that has been made thus far.